The Collective Power of #GivingTuesday

Ideas
The Collective Power of #GivingTuesday
Take-aways from this annual day to fuel us forward - and tips for your own end-of-year campaign.

Ya'll, let me tell you how much I love when CultureWorks projects succeed! Seriously, it brings my heart such unabridged joy.

While "success" doesn't always mean monetary gain for our folks ('cause let's be real, success is way deeper than just cash-flow), it's certainly satisfying when artists + cultural producers have the financial means to not only create, but also sustain their work.

And #GivingTuesday is one of the ways in which they can raise funds to do just that.

Entering its seventh year, #GivingTuesday is a global day of giving fueled by the power of community, collective power, and change. The day harnesses the potential of social media and the generosity of folks to help fuel the nonprofit sector. Essentially, #GivingTuesday kicks off the charitable season, when many focus on their holiday and end-of-year giving. This annual day of giving helps the nonprofit sector build a herd mentality - similar to that of Black Friday and Cyber Monday (albeit less capitalist). Since its creation in 2012 by the 92nd Street Y in New York, the day only continues to grow in reach and influence.

In 2017, #GivingTuesday broke all records, raising around $274 million nationally - with over 2.5 million gifts given (a 55% increase from the previous year). With over $360 million predicated for 2018, it's still too early to collate national data from 2018's rendition of #GivingTuesday; however, we can certainly share some take-aways from CultureWorks' fiscally-sponsored projects. 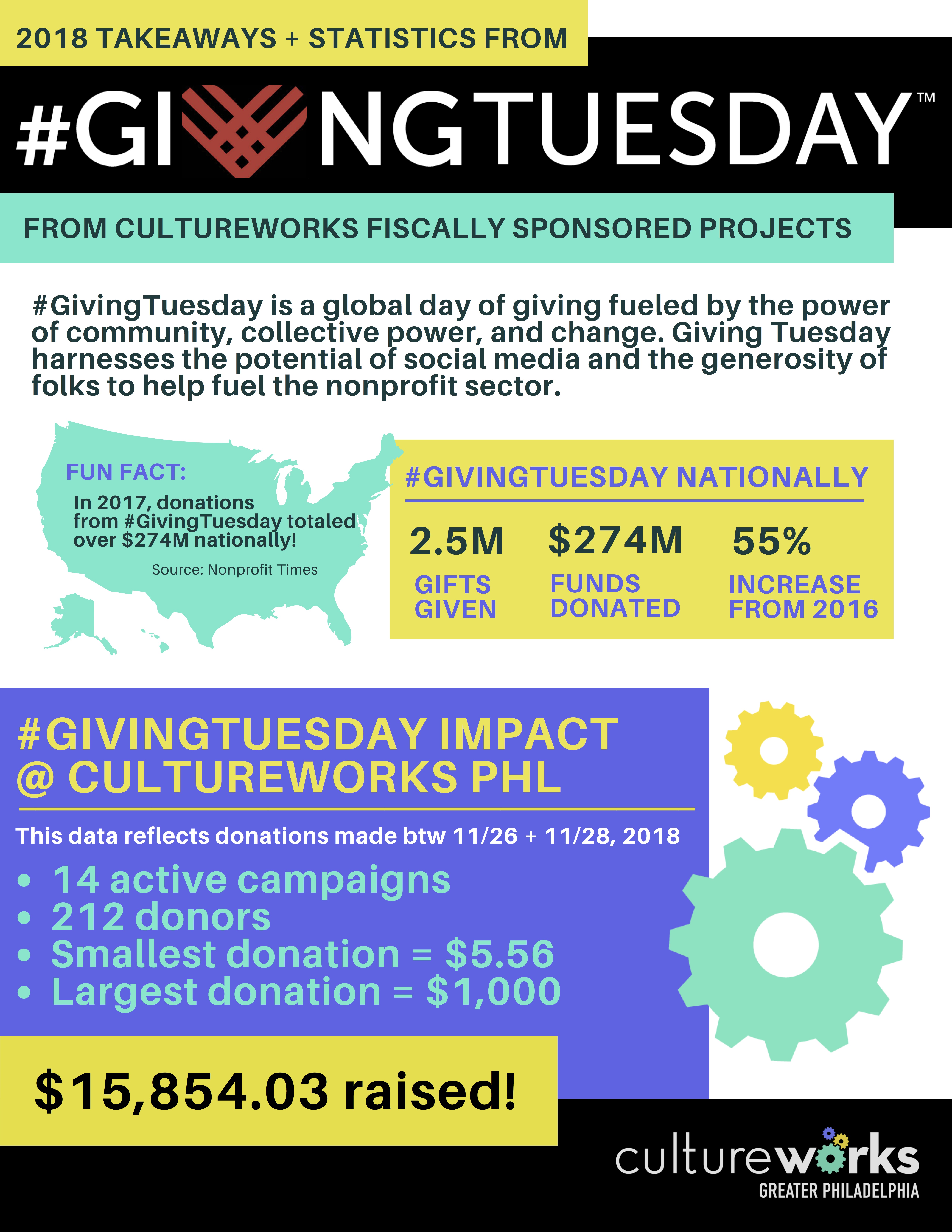 While many of our members and projects here at CultureWorks are conducting end-of-year appeals (you can check out some here), the following data represents just a slice of those folks, who are fiscally-sponsored at CW and running active campaigns.

At CultureWorks, this year's #GivingTuesday included 14 active project campaigns, using either WeDid.It (CW's customizable online donation platform) or Facebook Fundraisers. Feel free to check our their fundraising pages, many of which are still open for donations:

These numbers not only illustrate monetary gain for our projects - but, more importantly, reflect a bigger sense of our community where collective power has the ability to fuel us forward and imagine new worlds. So, a big, heartfelt THANKS to everyone who made these numbers a reality - to our members + projects - to our CW staffers - and to donors who believe in the transformative power of arts and culture.

As we look beyond #GivingTuesday, end of year fundraisers may be on your mind. Whether you're an organizer, donor, or both to one of these fundraisers, here are a few statistics to keep in mind:

So, as the year comes to a close, we're wishing you + yours all the love, light, and prosperity (both within and beyond your fundraisers). G'luck!